THE CASTLE OF OTRANTO by Horace Walpole

Although penned in 1764, Horace Walpole presents this story as derived from a mediaeval manuscript, and thus employs a studiedly antiquated idiom in its realization. I have scant regard for such conceits, preferring instead the forthright modernity of a Defoe or a Fielding; yet The Castle of Otranto remains notable, chiefly for its treatment of Ghosts and the Law.

Walpole, one of our foremost political intriguers, has oft, with a rum in him, repined to my self of the myriad anxieties that attend the modern parliamentarian; and he has written this tale in part, he says, to “have a day off.” His further purpose is to restore the fantastical and terrorific to our literary tradition, these having fallen out of fashion in our current Age of Reason. Here then is a tale of the supernormal, of spectres haunting the castle of Manfred, prince of Otranto, manifesting as ghastly groans, rattlings of armour, and cowl-clad skeletons, oft attended without by deafening thunder-claps. The effect is horrible indeed, and such devices, which I believe the critics term “claptrap”, may gain currency with a public hungry for sensation.

They are not, however, representative of reality. It is my experience that ghosts do not groan and stalk cobweb-ridden galleries, but are liker to abduct you in your own carriage from Drury Lane, dressed as Bow Street officers, then convey you to a mock trial in the shadow of an immense gallows, from which the hangman crows: “A rope for Judge Harbottle!” while Chief Justice Twofold, a withering phantasm unknown at the four Inns, pronounces sentence of death. Or perhaps that’s that just me. 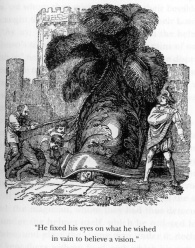 As to Law, it is the laws of property and inheritance that pertain here, the central conflict being the seizure of an aristocratic estate by an usurping family. Ancestral ghosts design towards a just restoration; though when the great-grandson of the original usurper is crushed beneath a giant knight’s enormous helmet, the judgement seems too harsh.

The Castle of Otranto is printed by Mr Thomas Lownds of Fleet-Street and costs a night’s sleep.